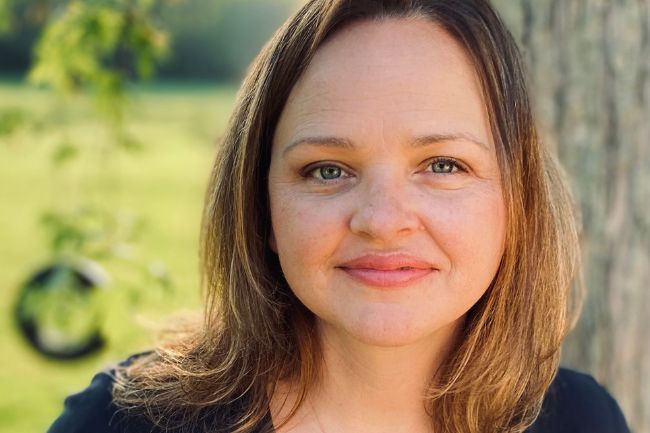 Angeline (she/her) is an Indiana based Dramatist Guild playwright, a bioethicist, and associate faculty at Indiana University-Purdue University in Indianapolis for the Applied Theatre, Film and Television program, and the Medical Humanities & Health Studies Program.  She developed courses at IUPUI to incorporate playwriting into health and medical education, such as Dramatic Medicine, Playwriting and Medicine, and Theatre of Health and War.  This spring she was the developer and playwriting instructor for a national online workshopping course free to U.S. veterans called Playwriting for Veterans, offered in collaboration with the Indiana Department of Veterans Affairs Outreach Program. The course brings U.S. veterans together from around the country to workshop their original plays.  Graduates of the class then participate in a monthly Writer’s Group. *She is very proud of this group of writers.

Angeline is also a volunteer guest facilitator for the Indiana Prison Writer’s Workshop, and a member of the Indiana University Conscience Project.  As a bioethicist, she works with the Marion County Public Health Department in Indianapolis and sits on three committees; Overdose Data to Action, Overdose Fatality Review, and the sub-committee Access to Care for individuals with substance use disorder. She is currently researching for a script examining the devastating effects of fentanyl and its connection to deaths in Indiana.

In 2018, Angeline was commissioned through the Myles and Peg Brand Fellowship in Bioethics to create a bioethical play to be used as a vehicle for public health.  Her full-length play The Spectrum of Letting Go examines opioid use disorder and drug diversions, moral injury and PTSD in Vietnam Veterans, hospice care, end-of-life decision-making, and several other issues faced by U.S. families (pre-Covid).  It has been performed nationally, including a staged reading by the Theatre Department at Hobart and William Smith Colleges, and an online reading hosted by Vs. Theatre of Los Angeles, with guest readers from Crescent City in New Orleans.   It also received an early read while Angeline was a Playwright Fellow for the 2019 Summer Residency at Indy Convergence in Indianapolis.  The Spectrum of Letting Go led to the idea and creation of the Playwriting for Veterans course, as Angeline was approached by several veterans after each performance with their own stories of moral injury to tell.

Since 2019, Angeline has assembled a group of dedicated academics, therapists, and theatre practitioners to develop the play The Last One about the suspicious poisoning in 1971 of a Black teenager named Michael.  Angeline and Abdul-Khaliq Murtadha are co-writing the piece along with Michael’s family members. The play presents the rippling effects of violent loss and grief on a family, including long-term health effects on Black men.  Throughout the development of this play, there has been a commitment to protecting all individuals from ongoing or potential trauma, specifically the surviving family members, but also the actors who will perform the piece.

In fall 2021, Angeline was brought onto “The Voices of Afghanistan” project by her writing partner AK Murtadha.  The project was conceptualized and produced by Che’Rae Adams at the LA Writers Center, and later performed live for HowlRound TV.  Angeline wrote monologues for individuals still trapped inside Afghanistan during the fall of Kabul.  This meaningful work inspired Angeline to continue writing for actor and activist Leena Alam, and other women activists around the world, particularly those in unsafe living environment whose identities need to remain concealed.

Angeline has a Master of Fine Arts degree in Playwriting from Indiana University, a Master of Arts degree in Philosophy specializing in Bioethics from IUPUI, a graduate certificate in Medical Humanities and Health Studies, also from IUPUI, and a Bachelor of Arts Degree in English from IUB.  While at Indiana University pursuing the MFA, Angeline was Assistant Instructor to Professor Dennis Reardon for three years, teaching Playwriting, Screenwriting, and Structure of Drama.  She was the playwriting and screenwriting instructor for the Bloomington Playwrights Project for several years, as well as a member of the BPP Writer’s Group, a judge for the annual play competition, a BPP Board Member, and interim co-artistic director.  Her plays were also produced at Indiana University and The Bloomington Playwright’s Project.  For over two decades, Angeline has provided feedback on thousands of scripts, led countless workshops, taught multiple scriptwriting courses, and encouraged hundreds of university students and community writers to write their own stories.  She voluntarily writes for those who cannot write for themselves.

She is very excited to be working again with Che’Rae Adams at PlayPenn this summer.