Associate Artistic Directors Dalian and Iacinti join PlayPenn at a critical moment for the organization, months before the return of its highly regarded annual New Play Development Conference, for which, this year PlayPenn accepted original scripts exclusively from Philadelphia playwrights. The Conference will present workshops and readings of six plays, additional readings of up to three works-in-progress, forums for artists, and a symposium or special programming on new play development issues or current events.

“PlayPenn fosters playwrights that are reflective of the community we live in,” said Artistic Director Che’Rae Adams, who assumed her position in January 2022. “The plays we develop—at the Conference and year-round—are an expression of the concerns of the present time. The appointments of Susan and Santi—with their extensive professional portfolios and personal life experiences—bring additional perspectives and approaches to PlayPenn and will help inform our work.”

“It’s a new day for American theatre—one that’s long overdue—and I believe that PlayPenn is rising to the occasion,” said Susan Dalian. “I was drawn to this leadership role because it presents the opportunity to really dig into the producing side of the art. As a Black female who has worked in this space for many years, rarely seeing myself reflected in these types of roles, I am excited to help shape PlayPenn’s future.”

“I feel a great sense of pride to be perhaps the first, if not only, Associate Artistic Director that is nonbinary, a DACA recipient, and a person of color,” said Santiago Iacinti. “But at the same time, this job is not about me and my personal gain, it is about making space for others. I want to center the artist and their creative process, and foster future artistic leaders from underrepresented communities.”

This year, PlayPenn received more than 120 original scripts from Philadelphia-based playwrights. Calls-for-submissions had historically been open to playwrights from across the country, but this year, an emphasis was put on the local community to support the talent and foster relationships with writers where the national nonprofit is based.

“It has been a homecoming of sorts for PlayPenn, going back to the basics of nurturing the thriving talent in Philadelphia which is a rich and vibrant artistic community,” said Adams, who relocated to Philadelphia from Los Angeles, while associates Dalian and Iacinti settle into PlayPenn. 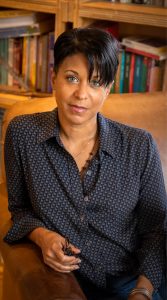 is a director based in Los Angeles. She has an extensive background in directing staged readings, working closely with playwrights as they develop their work. Recently, Dalian worked with Ricardo Pérez González to direct a virtual reading of his play Mother of God at Echo Theater Company’s Playwrights LAB 2022, and she directed several staged virtual readings in 2021, including Iseult et Tristan by Pia Wilson, (La Mama, NY/IAMA, LA), How To Raise a Freeman by Zakiyyah Alexander (AMMO Theatre), Breaking Barriers by Katrina D. RiChard (USC’sNew Works Festival), and Villains by Marq Ewing (LA Writer’s Center).

Susan was Resident Director at Sierra Classic Theatre from 2014 to 2018, directing unique concept stagings of several Shakespeare plays. She has also acted in many plays, films, and television shows. Susan has been a guest artist for the past four years teaching Storytelling through Improv with Burbank Unified School District. She is a graduate of Boston University’s B.F.A program. 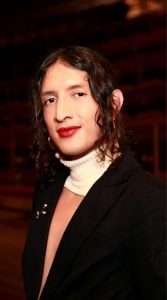 is a director and educator based in New York City. Their background is primarily in new work, including numerous World and American Premiere Productions in the U.S. Their work includes plays by contemporary playwrights Basil Kreimendahl, Kimber Lee, Winter Miller, Nick Gandiello, Mat Smart, Andrew Bovell, Rajiv Joseph, Guadalís Del Carmen, Andres Osorio, and Jordan Ramirez Puckett. Mentors include May Adrales and Eric Keen-Louie. Before being named Associate Artistic Director and Education Associate at PlayPenn, Santi was an inaugural member of the Roundabout Directors Group. They worked as a casting associate at X Casting NYC, a sexual harassment prevention trainer at ART/NY, in arts engagement at The Old Globe, and as a directing resident at Milwaukee Repertory Theater. Their training includes Sarah Lawrence College (MFA), University of San Diego (BA), Directors Lab West, and the Meisner Chekhov Integrated Studio.

Their work aims to use identity consciousness to create new futures both on- and off-stage, for queer artists of color. Santi identifies as gay femme nonbinary. They were born in Mexico. They are a Dreamer and DACA recipient. Also, an activist, Santi’s story has been featured by SDC as well as Lyft. They are bilingual and speak Spanish fluently.