How to Write Like Yourself—And Have Fun While Doing It, with Kate Tarker

This is not a class for learning how to write the perfect play. This is a workout for setting your imagination into overdrive.

You have to test the edges of your creativity to know who really are. Through a succession of muscle-building prompts, we will work toward surprising ourselves. You will come away from this class with a collection of shorter pieces that could be the beginnings of something more. This course is best for writers who are not beginners, but can approach work with a beginner’s mind; playwrights who want to challenge themselves, and who don’t want to keep writing the same play over and over again.

Students will be instructed to send Kate an email, which should include 1) hello, and a little bit about yourself as a person and a writer, and, as an attachment: 2) a passionate manifesto about what makes a great play. This class will include some moving around, so wear comfy pants. 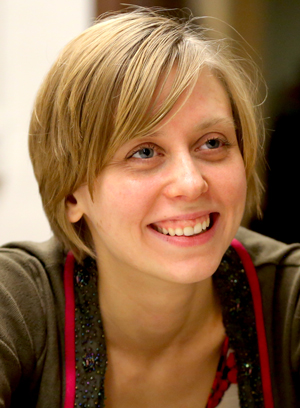 Kate Tarker’s plays THUNDERBODIES and Dionysus Was Such a Nice Man are having their world premieres this season, at Soho Rep and the Wilma Theater, respectively. Other plays include God is Dead, Let’s Make Love and Laura and the Sea (a finalist for the L. Arnold Weissberger Award and Princess Grace Award, and a semi-finalist for the Relentless Award). Her works have been developed at The Lark, The Vineyard, The Wilma, Ars Nova, New York Theatre Workshop, Magic Theatre, Cutting Ball, the Playwrights’ Center, and The O’Neill National Playwrights Conference, among others. She is the recipient of a Jerome Fellowship, The Vineyard’s Paula Vogel Playwriting Award, Theater Masters’ Visionary Playwright Award, and a PWCenter/NET Ensemble Collaboration Grant. She has also collaborated with Pig Iron and SITI Company Conservatory. Tarker is a two-time MacDowell Colony Fellow, an Ars Nova Play Group alum, a New Georges Jam member, and a former Playwrights’ Center Core Writer. She has been featured twice on the Kilroys List. M.F.A. Yale.